A clash broke out between pro and anti-CAA protesters in Delhi’s Maujpur area on Sunday evening, which led to stone-pelting 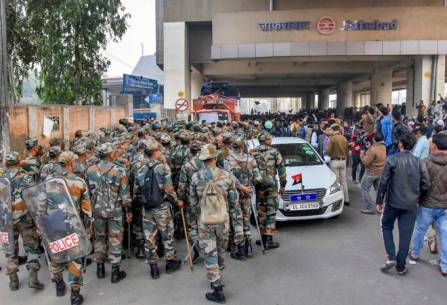 The protest began on Saturday night after hundreds of anti-CAA protesters, mostly women, blocked a road near the Jaffrabad metro station (PTI)

Stone-pelting between two groups was reported in Delhi’s Maujpur area on Sunday evening where a pro-Citizenship Amendment Act (CAA) rally was going on. Maujpur is located near Jaffrabad area in northeast Delhi where an anti-CAA protest is also going on simultaneously.

According to a PTI report, a clash broke out between pro and anti-CAA protesters, which led to stone-pelting.

In a bid to control the situation, Police fired tear gas shells as members of the two groups pelted stones at each other. As per latest report, heavy security has been deployment at Jaffrabad and its adjoining areas. DCPs of other areas including that of east district have also been called. Given the tense situation in Maujpur, more troops of paramilitary force have also been called.

Bharatiya Janata Party (BJP) leader Kapil Mishra and others had arrived near the Jaffrabad Metro Station at around 3 pm and had demanded the road to be emptied. He said that another Shaheen Bagh will not be allowed in the capital city.

At around 4 pm, some people came from a street and started pelting stones.

The situation escalated quickly, however, police could not do anything as they were outnumbered by the crowd.

The protest began on Saturday night after hundreds of anti-CAA protesters, mostly women, blocked a road near the Jaffrabad metro station which connects Seelampur with Maujpur and Yamuna Vihar.

“Entry & exit of Jaffrabad have been closed. Trains will not be halting at this station,” the Delhi Metro Rail Corporation tweeted.

Gas prices set to fall 7 cents a litre across Canada...

Amazon to stop shipping non-essentials in Italy and France