Goods and services tax (GST) collection has crossed the Rs 1 lakh crore mark for the fourth consecutive month in February on the back of anti-evasion steps taken by tax officers. The GST revenue collection stood at Rs 1.05 lakh crore in February, registering a growth of 8 per cent over the same month last year. The collection, however, was lower than the Rs 1.10 lakh crore collected in January 2020. This is for eleventh time since introduction of GST in July 2017 that the monthly revenues have crossed the mark of Rs 1 lakh crore.

The GST collection for February include CGST (Central GST) of Rs 20,569 crore, while SGST (State GST) and IGST (integrated goods and services tax) have been recorded at Rs 27,348 crore and 48,503 crore, respectively. Cess for the month stands at Rs 8,947 crore. 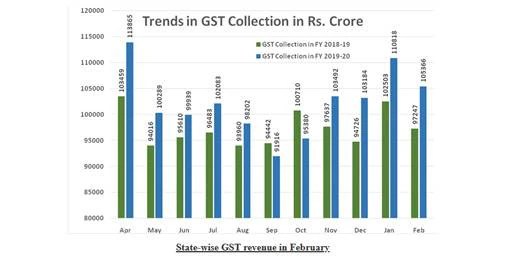 The total number of GSTR 3B returns filed for the month of January and February stood at 83 lakh. The GSTR 3B form is a monthly self-declaration form declared by the Indian government for the return filing only of GST implementation.

The GST revenues from domestic transactions have shown a growth of 12 per cent over the revenue during the same month last year. During this month, the GST on import of goods has shown a negative growth of (-) 2 per cent as compared to February 2019.

Oil price plunges to lowest level since 1999 as world drowns...