OnePlus launched its latest flagships, the OnePlus 8 and OnePlus 8 Pro via a web stream yesterday. The two phones were launched alongside new accessories that the company hopes will add to the overall value of the OnePlus ecosystem.

But while these accessories — the Warp Charge 30 Wireless dock and Bullets Wireless Z — are interesting products in their own right, the show stoppers were definitely the OnePlus 8 series of smartphones.

As the most expensive OenPlus phones to date, the two bring with them a number of firsts and also feature internals and design to match the premium price tag. Let’s take a look at the two phones to see how the two differ from each other.

On the outside, both phones bring impressive displays. However, of the two, it is definitely the OnePlus 8 Pro that features a better panel. This is because the OnePlus 8 Pro flaunts a bigger Fluid AMOLED panel that’s 6.78-inches in size and can churn up to QHD+ resolutions at 120Hz. The panel is also rated for a pixel density of 513ppi and an aspect ratio of 19.8:9. There’s also support for vivid HDR10+ support for improving visual experience while watching movies and playing games.

In comparison, the OnePlus 8 comes with a smaller 6.55-inch FullHD+ Fluid AMOLED display, with an aspect ratio of 20:9 and a pixel density of 402ppi. Rated at 90Hz, the panel is also slower at refreshing than the one on the OnePlus 8 Pro.

In terms of performance, the two make the same promise as they come with the promise of being the fastest OnePlus smartphones to date. This is because both the phones feature the same 5G enabled Snapdragon 865 chipsets paired with up to 12GB of RAM and 256GB of storage.

However, it’s important to note that between the two, the OnePlus 8 pro will still be slightly faster at benchmarking as it packs LPDDR5 RAM chips that are claimed to be up to 30 per cent faster and 20 per cent more energy-efficient than the LPDDR4X RAM on the OnePlus 8.

The hardware on both the phones has been tasked to run the company’s Oxygen OS which is based on Google’s Android 10 operating system. 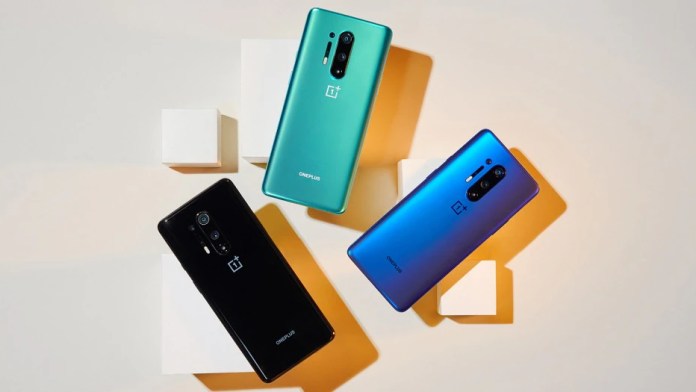 On the other hand, OnePlus 8 only gets a triple camera module. Of the three cameras, the primary is a 48-megapixel lens that’s a Sony IMX586 sensor. The secondary is an ultra-wide 16-megapixel lens, while the third sensor completing the module is a 2-megapixel macro lens.

OnePlus 8 vs OnePlus 8 Pro: Battery and other features

Keeping the lights on the OnePlus 8 Pro is a 4510mAh battery pack which for the first time can be charged wirelessly at 30W using the company’s Warp Charge 30 Wireless dock. It promises to fill up half the battery in 30 minutes of charge. There’s also support for wired Warp 30T charging which OnePlus claims can charge half the battery in just 23 minutes.

The OnePlus 8 because of its display brings a smaller battery — 4300mAh — which also misses out on support for wireless charging but can be fast charged through the OnePlus 8’s Warp 30T supporting Type-C port. Additionally, the OnePlus 8 Pro also gets IP86 water and dust proofing, with the OnmePlus 8 missing on the rating.